The official date of the discovery is August 16th 1896. The discovery was made on Rabbit Creek, a small tributary of the Klondike River by a party led by Skookum Jim Mason (a member of the Tagish nation whose birth name was Keish), and included Dawson Charlie as well as Kate and George Carmack. It is unclear who exactly discovered the gold, but the claim was staked under George Carmack’s name for social and political reasons of the time. The creek was soon renamed Bonanza creek and the word of the discovery got out and sparked one of the biggest Gold Rush in history. 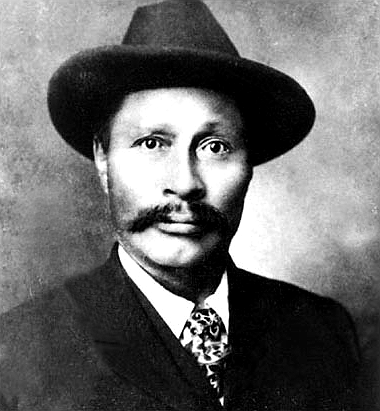 The news spread to other mining camps in the Yukon River valley, and the Bonanza, Eldorado and Hunker Creeks were rapidly staked by miners who had been previously working creeks and sandbars on the Fortymile and Stewart Rivers. It also traveled to nearby Alaska and prospectors made their way as soon as possible over the winter to put their hands on a piece of land before everything was staked.

News reached the United States in July 1897, when the first successful prospectors arrived in San Francisco on July 15 and in Seattle on July 17, setting off the Klondike stampede. In 1898, the population in the Klondike may have reached 40,000, which threatened to cause a famine.

Most prospectors landed at Skagway, Alaska, or the adjacent town of Dyea, both located at the head of the Lynn Canal. From these towns they traveled the Chilkoot Trail and crossed the Chilkoot Pass, or they hiked up to the White Pass into the Yukon Territory and proceeded to make their way to Lake Lindeman and Lake Bennett, the headwaters of the Yukon River. Here, after some 25 to 35 grueling miles (40 – 56 km) from where they landed, prospectors built rafts and boats that would take them the final 500-plus miles (800-plus km) down the Yukon River to Dawson City, near the gold fields. Stampeders all had to carry a year’s supply of goods — about a ton, more than half of it food — over the passes to be allowed to enter Canada. At the top of the passes, the stampeders encountered a Mountie post that enforced that regulation. It was put in place to avert shortages like those that had occurred in the previous two winters in Dawson City. 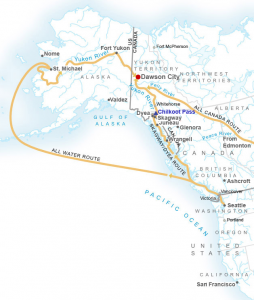 Routes to the Klondike 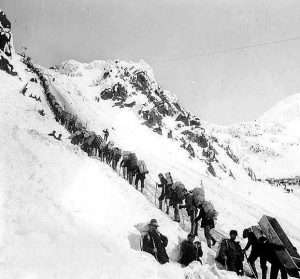 The climb to the Chilkoot Pass was steep and hazardous, rising a thousand feet in the last half mile (300 m in 800 m). It was too steep for pack animals, and prospectors had to pack their equipment and supplies to the top. Some 1,500 steps were carved into the ice to aid travel up the pass.

Even though the elevation was less important, conditions on White Pass were even worse. It was known as the Dead Horse Trail, since about 3,000 animals died along the route because anxious prospectors overloaded and beat their pack animals and forced them over the rocky terrain until they dropped.

An estimated 100,000 people participated in the Klondike Gold Rush and about 30,000 made it to Dawson City in 1898. By 1901, when the first census was taken, the population had declined to 9,000. At the peak of the Gold Rush, Dawson City was the largest city North of Seattle and west of Winnipeg.

By the time most of the stampeders arrived in the Klondike and could start searching for gold, it was too late to leave because the summers are extremely short in the North. They would have to endure seven months of cold, darkness, disease, isolation and monotony. For those lucky enough to find gold, the story was different. Many successful prospectors lived extravagantly. For the vast majority, however, life was about survival and life was far from easy.

Throughout this period, the North West Mounted Police, under the command of Charles Constantine and his more famous successor, Sam Steele, maintained a firm grip on the activities of the prospectors to ensure the safety of the population as well as enforcing the laws and sovereignty of Canada, strictly policing the entry of weapons into the territory and requiring all those transiting White Pass or Chilkoot Pass to be carrying sufficient goods to survive. As a result, this gold rush has been described as the most peaceful and orderly of its type in history. The effectiveness of the Mounties in this period made the police force famous around the world and ensured the survival of the organization at a time when its continued operation was being debated in the Canadian Parliament.

The first female member of the North West Mounted Police was Katherine Ryan, widely known as Klondike Kate. In addition to staking three claims in the Klondike area, she was also a gold inspector, entrepreneur and political activist — all very unusual activities for a woman to be involved in at the time. Her motto was “I wasn’t built for going backwards. When I once step forward, I must go ahead.” Another Yukon legend to claim the title of Klondike Kate was Kathleen Eloise Rockwell, a dancer-turned-gold rush entertainer in Dawson City. It seems that Rockwell tried to claim the accomplishments of Ryan by using the famous name Klondike Kate all of her life poisoning the reputation of a far more accomplished woman.

For a few short years, Skagway, Alaska (the main “Yukon Port”) and Dawson City were on the world’s “Grand Tour”, an around-the-world circuit for the wealthy and those who entertained them; musicians and other artists of the stature of Anna Pavlova made the long journey to visit the city where the streets were virtually paved with gold (claims staked on the gravel pits used to pave downtown Dawson have been found to have a higher percentage of gold in them than operating claims).

The Klondike field continues to be worked today, although most of the original deposits were removed in the early 1900s when small claim holdings were consolidated and were worked by large-scale industrial extraction methods, notably steam dredges. 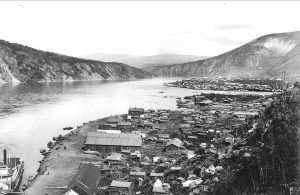 The Klondike gold rush brought about a rapid advance in the development of the Yukon Territory, which was officially formed by Parliament on 13 June 1898. It also brought difficulties for the people indigenous to the region. The Han people of the Yukon valley were pushed aside and marginalized. Only a century later, as a result of land claim settlements have the Tr’ondëk Hwech’in found redress and self-governance.

Among the many to take part in the gold rush was writer Jack London, whose books White Fang, The Call of the Wild, and To Build A Fire, a collection of short stories, were influenced by his northern experiences, and adventurer “Swiftwater” Bill Gates. Part I of Jack London’s 1910 novel Burning Daylight is centered around the Klondike Gold Rush.

Another literary luminary connected with the rush, and whose cabin still stands in Dawson City, was folk-lyricist Robert W. Service, whose short epics The Shooting of Dan McGrew and other works describe the fierce grandeur of the north and the survival ethic and gold fever of men and women in the frozen, gold-strewn north. Service’s best-known line is the opening of The Cremation of Sam McGee, which goes “There are strange things done in the midnight sun by the men who moil for gold…”.

One of the most thorough popular histories of the Klondike Gold Rush, titled simply Klondike, was written by Canada’s Pierre Berton, who was raised in the Yukon Territory. (In the United States, Berton’s book is entitled The Klondike Fever.) Berton covers nearly every misadventure of the nightmarish and harrowing journeys taken by the many parties on different routes bound for Dawson City, and also covers in fair detail the goings-on in that town up until about 1904.